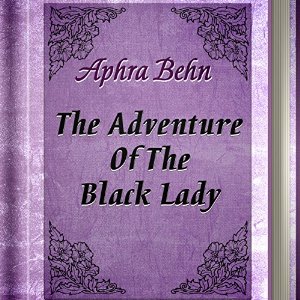 The Adventure of the Black Lady by Aphra Behn. I had my reason to be skeptical about the potential of the story to take me all through the last page. After all, a reader always expects to get enticed from the very first sentence. Yes, there are novelists who give you the essence of the entire story in the first few paragraphs followed by only dramatic and psychoanalytical progression of the characters and their existential dilemma. And there are novelists who do not reveal the quintessential mystery that holds the character together until the last lines. Personally, I am an admirer of the former types. It weaves the story around some unpredictable and predictable characters can be characterized as having signs of both worlds.

The tension that arose upon the arrival of the Bellamora as a provincial lady among her relatives continued through the pages until it begins to shed light on the characters around. Although, the pace of the novel could have been slower at times to offer more ponderous moments for the readers, even though we admit the brilliance of such storytelling. But then, it is the storytelling that alone remains as praiseworthy, because the expression of sensibilities and ironies in this story do not have much to offer for our already over-consumed twenty first century readership. So, smart and entertaining storytelling apart, the novel could not leave an impression deep down the memory lane.

In the novel Bellamora represents all the pride and sensibilities typical of highly esteemed provincial ladies who never found a dearth of interest from men of equal social status. But, unlike the women of high self-esteem in a provincial setting her objection to pretended love and other expressions of flattering reveal her inherent moral strength. Moreover, amidst misfortunes of all sorts she always maintained calm and never failed to show the charming side of her personality. This typical compose of moral character and social appearance, create the kind of somber aura around her personality that readers no sooner can forget. The author Aphra Behn (www.wisegeek.com/who-is-aphra-behn.htm) created her female protagonist with all the precise and delicate shades of a proud, sensible and charming provincial lady personality. If a novel can make a lasting impression thanks to the portrayal of a brilliant character who takes the reader through the pages, then this novel will continue to inhabit reader’s mind thanks to Bellamora.

To make an honest judgment of this novel one needs to shrug off the storyline and the aura created by its central character. Yes, any creative writing should be judged on account of literary merit alone and in that respect the novel lacks a few things. First of all, the story has been told in a hurried manner without much meditation and focus on each character and drive. Secondly, the pleasure of reading has been compromised as either sense of humor or apathy lacked in various places. After all, through literature we become aware of the inherent motivation and drive of the character rather than just the surface reality of their condition and interaction.

Most importantly, the novel in spite of being quite well written, just could not be enough appealing. Whether in sensual aspects or for creating a moral saga or in paving the path for an alleviating spiritual journey, it could not satisfy any literary objectives. It could not be sensual or thought provoking or emotionally heart rendering to create a lasting impression. The novel began by just stating a fact in a mundane manner. The author failed to create an ambience and situate the context within. From the seemingly abrupt nature of the characters and their progression, it seems we are reading it from the middle of the novel. Similarly, the ending does not lead to any truthful or poetic expression that takes us beyond the storyline.